Is there a trailer for Second Act movie?

STXfilms on Thursday, July 19, 2018 released the trailer for "Second Act" you can watch here:
Second Act | Official Trailer | Own It Now On Digital HD, Blu-Ray & DVD. 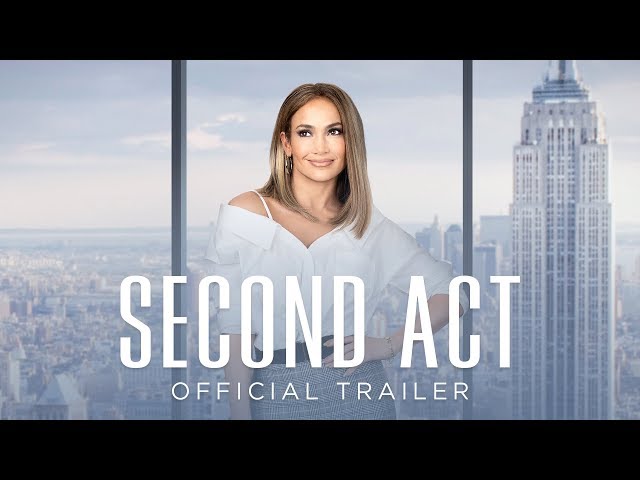 What is Second Act movie plot?

Maya Vargas (Jennifer Lopez) is the assistant manager of the Value Shop store, where she has worked for the past 15 years. During that time she dramatically improved sales, customer relations, and general store culture through her intuitive and innovative methods. She awaits a store visit by an executive of her company, Mr. Weiskopf (Larry Miller), anxiously hoping to be promoted to manager. Her boyfriend Trey (Milo Ventimiglia), co-workers, and several regular customers all assure her that she is guaranteed the promotion, but she is passed up in favor of Arthur, a non-local company employee with an MBA from Duke. Mr. Weiskopf explains that while he values Maya's dedication and success, she only has a GED and no college degree, which makes her ineligible for the promotion by company policy. Her godson, a skilled computer programmer, rebuilds her background online, giving her a Harvard degree and world travel, and she is hired by one of the store's suppliers, a large cosmetics company. The CEO, Mr. Clarke, has her head a team developing a new product in competition with a team led by his daughter, Zoe (Vanessa Hudgens). During her time with the company, Maya learns that Zoe is the daughter that she gave up after giving birth as a teenager because she couldn't cope with the challenges of parenthood herself.

Who plays who in the Second Act movie cast?

Here is the full cast and characters of "Second Act" movie. Actors and actresses are sorted mostly in credits order.

What are Second Act filming details?

"Second Act" movie is rated "PG-13", according to the MPAA film rating system.

Principal photography began on October 23, 2017 in New York City, initially at Food Bazaar Supermarket in Queens, and then continuing in The Bronx and Manhattan, including at Michael Jordan's Steakhouse in Grand Central Terminal.

What are critics and audiences saying about Second Act movie?

"Second Act" movie got average rating from critics. IMDB rating is 5.8/10. Rotten Tomatoes rating is 44/100. But the audience kinda likes the film. Audiences polled by CinemaScore gave the film an average grade of "B+" on a scale ranging from A+ to F.

More information and reviews on "Second Act" movie you can get on the following websites.

Second Act on IMDB is available at:

Second Act on Wikipedia is available at: