Is there a trailer for Hot Summer Nights movie? 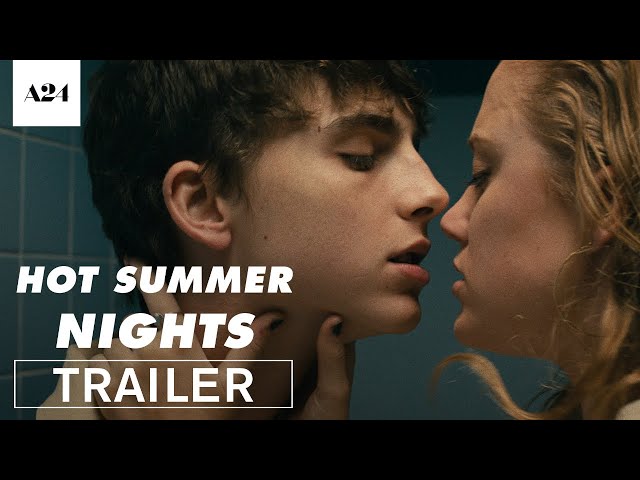 In 1991, Daniel, an awkward teenager, is sent by his mother to spend the summer with his aunt on Cape Cod after the death of his father. He is not excited about it at first, but soon he meets Hunter Strawberry (Alex Roe), the bad boy in town. While working at a convenience store, Hunter hurriedly asks Daniel to hide marijuana from approaching police officers. They later become business partners in selling drugs from a man named Dex (Emory Cohen). He provides Daniel and Hunter with the connections they need to facilitate their business but warns them about the fatal consequences if he gets crossed.
Hunter's younger sister McKayla (Maika Monroe) is the most crushed-on girl on Cape Cod. After escaping from her boyfriend at the drive-in, McKayla asks Daniel to take her home. Although Hunter forbids him to see McKayla, Daniel cannot help himself. At the summer carnival, he surprisingly kisses her, resulting in a beating by McKayla's boyfriend and his friends. Daniel and McKayla soon start dating secretly. At the same time, Hunter develops a relationship with Amy (Maia Mitchell), the daughter of Sergeant Frank Calhoun (Thomas Jane), who becomes suspicious about his daughter's whereabouts.
Selling marijuana becomes very profitable, and Daniel and Hunter start to make a lot of money. Their success and rising tensions within their lives intertwine with the impending Hurricane Bob, soon to reach Cape Cod. Daniel wants to start selling cocaine without letting Dex know, but Dex finds out and wants Hunter to kill Daniel. Hunter tells Daniel to run and never come back, and when Dex finds Hunter, he kills him. McKayla sees her brother killed and flees town. According to the narrator, Daniel and McKayla are never seen again.

Who plays who in the Hot Summer Nights movie?

Here is the full cast and characters of "Hot Summer Nights" movie. Actors and actresses are sorted mostly in credits order.

What are critics and audiences saying about Hot Summer Nights movie?

"Hot Summer Nights" movie got average rating from critics. IMDB rating is 6.4/10. Rotten Tomatoes rating is 43/100. But the audience kinda likes the film.

More information and reviews on "Hot Summer Nights" movie you can get on the following websites.

Hot Summer Nights on IMDB is available at:

Hot Summer Nights on Wikipedia is available at: