Here are "Blow the Man Down" movie trailer, plot summary, full cast and characters, release date, streaming services and everything we know so far.

Is there a trailer for Blow the Man Down movie?

Amazon Prime Video on Wednesday, February 05, 2020 released the trailer for "Blow the Man Down" you can watch here:
Blow The Man Down - Official Trailer | Prime Video. 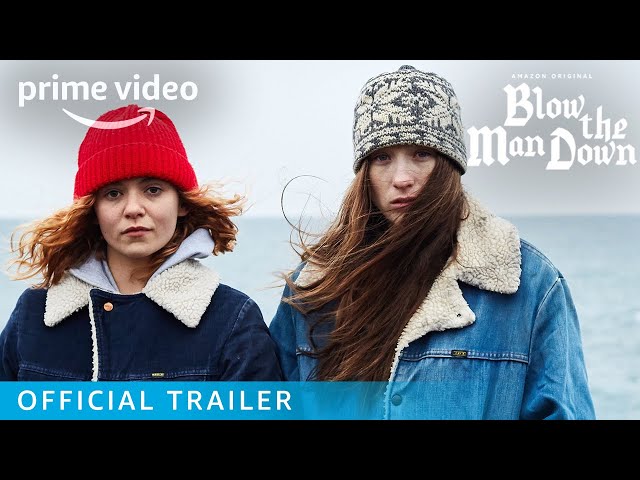 What is Blow the Man Down movie plot?

Here is a short review of "Blow the Man Down" movie plot summary.

Priscilla (Sophie Lowe) and Mary Beth Connolly (Morgan Saylor) are sisters living in the small fishing town of Easter Cove, Maine, whose mother has recently died. At the wake, Doreen Burke (Marceline Hugot), Susie Gallagher (June Squibb), and Gaile Maguire, contemporaries of their mother, offer condolences. Mary Beth learns that the family fishmonger business is in trouble and that their mother took out a loan against the house which could jeopardize their continued ownership of it. After arguing with Priscilla, she storms out and heads to a bar. Mary Beth begins drinking with a man named Gorski (Ebon Moss-Bachrach). Later she is driving him home, but crashes the car when he caresses her leg. When they get out to inspect the damage, the trunk accidentally opens and Mary Beth sees blood inside. Gorski attempts to force himself on her and she flees. When he follows her, she stabs him with a harpoon and then bashes his head in with a brick.
Mary Beth returns home covered in blood to a shocked Priscilla, who calls the police, but changes her mind and hangs up. Priscilla helps Mary Beth get rid of Gorski's body, using a knife to chop up his arms to make the body fit in a cooler box that they then throw into the ocean. The next day, Priscilla can't find the knife they used, which has 'Connolly Fish' written on it. Mary Beth goes to Gorski's shack to find the knife, but instead finds a bag containing $50,000. Later, Enid, a brothel owner, sees the Connolly knife in Gorski's shack.
Local policeman Brennan asks to borrow the Connolly's boat, indicating that a body has washed up on shore. Priscilla is terrified that it is Gorski but it turns out be a woman named Dee (Meredith Holzman), who worked for Enid. Brennan and his older partner Colletti interview Enid, who tries to steer them away from the brothel. Brennan finds her suspicious, but is warned off by Colletti, who has known Enid for years. Priscilla and Mary Beth talk to Doreen who reveals that years ago she, Susie, Gail (Annette O'Toole), and their mother had made a decision: to satisfy the lusts of the fishermen, and protect their own daughters, they allowed Enid to open the Oceanview brothel.

Who plays who in the Blow the Man Down movie cast?

Here is the full cast and characters of "Blow the Man Down" movie. Actors and actresses are sorted mostly in credits order.

When is Blow the Man Down movie release date?

"Blow the Man Down" movie release date was scheduled to be on April 26, 2019 (Tribeca) and on March 20, 2020 (United States) distributing by Amazon Studios and Amazon Prime Video.

What are Blow the Man Down filming details?

"Blow the Man Down" movie is rated "R", according to the MPAA film rating system.

What are critics and audiences saying about Blow the Man Down movie?

More information and reviews on "Blow the Man Down" movie you can get on the following websites.

Blow the Man Down on IMDB is available at:

Blow the Man Down on Wikipedia is available at: