Watch the official trailer for "We Summon the Darkness" 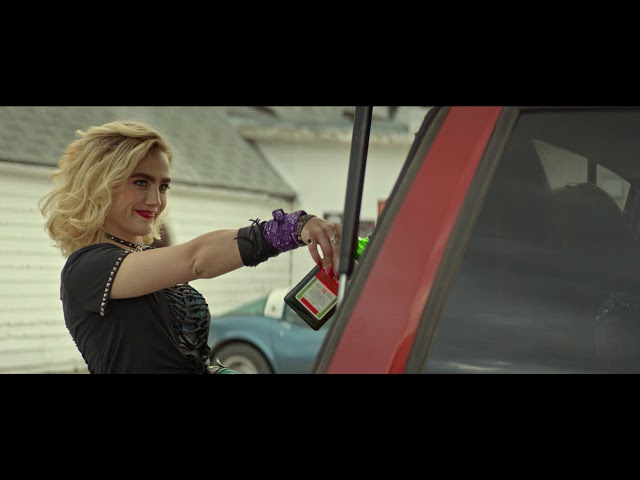 What is "We Summon the Darkness" about?

In Indiana, July 1988, Alexis Butler (Alexandra Daddario) and her two friends Val (Maddie Hasson) and Bev are driving to a heavy metal show, when a milkshake is thrown from a blue van onto their windshield. Once they arrive at the concert, they find the same blue van, and Val throws a small firecracker into it, causing the three boys inside to climb out. Ivan (Austin Swift) owns the van and his buddies Kovacs (Logan Miller) and Mark (Keean Johnson), who is said to be leaving for Los Angeles soon, are interested in the girls. After the show, Alexis invites the boys to her father's empty mansion. Bev and Mark seem to like each other, yet Bev seems to almost avoid him. As they play a game of Never Have I Ever, the girls drug the boys' drinks and reveal they are going to murder them and make it look like a Satanic cult killing.
The Daughters of the Dawn, the church the girls are a part of, has murdered eighteen other people in the same way in order to create fear and send more people to their religion. Alexis is shown to be the most insane and stabs Ivan after he criticizes her religious belief in Christ, and he bleeds to death. Mark and Kovacs briefly escape, hiding in a pantry. Susan (Allison McAtee), Alexis's soon-to-be ex-stepmother, comes home to retrieve a passport and reveals she has called the police because she saw the strange blue van and the house lights on. Susan then discovers Ivan's body and Alexis stabs her to death.
A police officer arrives and becomes suspicious, so Alexis runs from him and back into the house where he chases her, gun raised. The officer finds the injured Kovacs and Mark who pleads for help, but Val sneaks up on him, takes his gun, and shoots him, killing him. As Alexis and Val fight over the gun, Bev appears, threatening her friends with an electric outboard trolling motor. Val and Alexis tell Bev they are doing the Lord's work, but Bev declares she will let Mark and Kovacs go.

Who's in the "We Summon the Darkness" cast?

Here is the full cast and characters of We Summon the Darkness.

When is "We Summon the Darkness" released in cinemas?

The film We Summon the Darkness was scheduled to be released on February 28, 2019 (Mammoth Film Festival), on September 21, 2019, on December 13, 2019 (United States) and on April 10, 2020 (United States) by Saban Films, Signature Entertainment, Presidio, Splendid Film, Lionsgate Home Entertainment and Netflix.

What are "We Summon the Darkness" film specifications?

The film We Summon the Darkness is rated with "R" rating.

What are critics and audiences saying about "We Summon the Darkness"?

We Summon the Darkness got high rating from critics. IMDB rating is 5.2/10. Rotten Tomatoes rating is 69/100.

Other sites about "We Summon the Darkness"

More information about We Summon the Darkness you can get at:

IMDB: We Summon the Darkness

Wikipedia: We Summon the Darkness