Is there a trailer for Hubie Halloween movie? 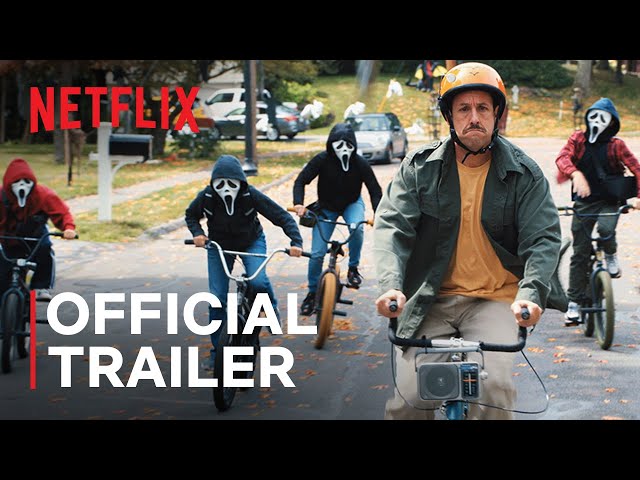 What is Hubie Halloween movie plot?

Hubie Dubois (Adam Sandler) is a delicatessen employee in Salem, Massachusetts who is ridiculed by almost the entire city, and is the butt of many practical jokes while his antics have annoyed police sergeant Steve Downey (Kevin James) and Father Dave (Michael Chiklis). Hubie spends his time during Halloween monitoring the city as the official Halloween Helper.
The day before Halloween, Hubie meets his strange new neighbor Walter Lambert (Steve Buscemi), and news spreads around town about Richie Hartman (Rob Schneider), a convict who has absconded from a local mental institution.
The next day is Halloween; Hubie is working as Halloween Monitor and investigates Walter's home after reports of strange noises. Having reported this to the police, he is "recruited" by Downey as an "AUU" (auxiliary undercover unit). Hubie believes this assignment is genuine, although Steve hopes it will deter Hubie from bothering him.
Hubie goes to a local Halloween party to monitor the activities. However, it soon turns sour. Hubie is tricked into going into a corn maze following reports about a lost child. Hubie's teenage co-worker Mike follows hoping to scare Hubie. Hubie finds Mike and sees him getting pulled into the maze and then disappearing.
Hubie moves his attention to monitoring at a drive-in cinema. Hubie's old classmates Lester and Mary Hennessey (Maya Rudolph) scare Hubie after false reports of suspicious activity in one of the cars at the drive-in (who turn out to be trick-or-treaters driven by Mr. Hennessey to throw eggs at Hubie). He flees into the woods and finds Walter. Walter thinks he is turning into a werewolf and chases Hubie to a haunted house in a fun fair.

Who plays who in the Hubie Halloween movie?

Here is the full cast and characters of "Hubie Halloween" movie. Actors and actresses are sorted mostly in credits order.

"Hubie Halloween" movie release date was scheduled to be on October 7, 2020 distributing by Netflix.

What are Hubie Halloween filming details?

"Hubie Halloween" movie is rated "PG-13", according to the MPAA film rating system.

Principal photography began in July 2019 around Salem, Lynnfield, Hamilton, Marblehead, Danvers and other parts of Massachusetts, wrapping in early September.

What are critics and audiences saying about Hubie Halloween movie?

More information and reviews on "Hubie Halloween" movie you can get on the following websites.

You can watch Hubie Halloween online streaming on Netflix:

Hubie Halloween on IMDB is available at:

Hubie Halloween on Wikipedia is available at: