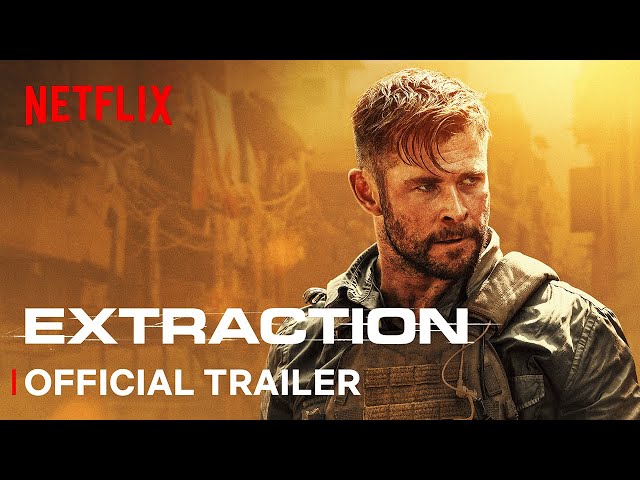 After a day at school, Ovi Mahajan (Rudhraksh Jaiswal) - son of an incarcerated Indian drug lord - sneaks out of his house to visit a club, where he is kidnapped by police officers working for rival drug lord Amir Asif (Priyanshu Painyuli). Saju Rav (Randeep Hooda), a former Para (SF) operator and Ovi's protector, visits Ovi's father in prison. Unwilling to pay the ransom as it will hurt his prestige, Ovi Mahajan Sr. (Pankaj Tripathi) orders Saju to retrieve his son, threatening Saju's own son.
Tyler Rake (Chris Hemsworth), a black-market mercenary and former SASR operator, is recruited by fellow mercenary Nik Khan (Golshifteh Farahani) to rescue Ovi from Dhaka, Bangladesh. Rake and Khan's team prepare to extract Ovi, with his father's men set to pay them once Ovi is recovered. Rake rescues Ovi, kills his captors, and takes him to the extraction point, but his father's men intentionally fail to transfer the funds. Instead, Saju kills Rake's teammates and tries to kill Rake so he can rescue Ovi himself. Learning of Ovi's escape, Asif orders the head of the local police, Colonel Rashid, to initiate an immediate lockdown of Dhaka, securing all bridges and travel points out of the city.
Khan arranges for a helicopter to extract Rake outside the city and tells him to abandon Ovi since the contract has been nullified. He refuses, haunted by memories of his own son, who died at a young age from lymphoma when he left to serve in Afghanistan. After escaping Saju and the corrupt police and tactical units on Asif's payroll, Rake fights off a gang of boys led by Farhad (Suraj Rikame), a young criminal eager to impress Asif. Rake calls his friend Gaspar (David Harbour), a retired squad-mate living in Dhaka, and he and Ovi lay low at Gaspar's home for the evening. Gaspar reveals Asif has placed a $10 million bounty on Ovi, which he offers to share if Rake allows him to kill Ovi. Rake refuses and fights Gaspar, who gains the upper hand but is fatally shot by Ovi with his own gun.

Who plays who in the Extraction movie cast?