Is there a trailer for Murder Mystery movie? 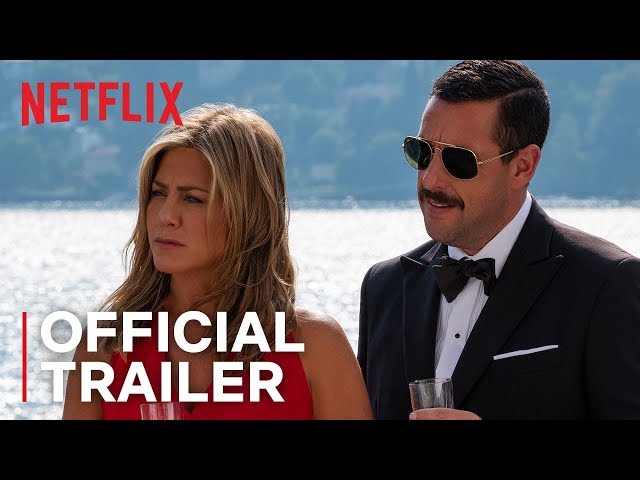 What is Murder Mystery movie plot?

Nick Spitz (Adam Sandler) is a New York police officer, and his wife Audrey (Jennifer Aniston) is a hairdresser. Audrey wants to visit Europe, as Nick had promised at their wedding, but thinks they never will. After their 15th-anniversary dinner, Audrey confronts Nick, who lies that he has in fact booked the trip, and they set off to Europe. On the plane, Audrey meets billionaire Charles Cavendish (Luke Evans), who invites the couple to join him on his family yacht for a party celebrating his elderly uncle's upcoming wedding to Charles's former fiancée. After seeing how crowded and unpleasant-sounding their previously planned bus tour would be, Nick agrees.
Aboard the yacht, Nick and Audrey meet Cavendish's ex-fiancée Suzi Nakamura (Shioli Kutsuna), his cousin and Quince's son Tobey, actress Grace Ballard (Gemma Arterton), Colonel Ulenga (John Kani), his bodyguard Sergei (Ólafur Darri Ólafsson), Maharajah Vikram (Adeel Akhtar), race car driver Juan Carlos, and later that night their host, Malcolm Quince (Terence Stamp), Cavendish's uncle arrives. Quince announces that his new wife Suzi will be the only one to receive his inheritance, believing the others only feign interest in him because of his money. Before he can sign his new will, the lights go out and come back on to reveal Quince dead, stabbed with a ceremonial dagger.
Nick, who has lied to Audrey about recently becoming an NYPD detective, orders the room locked, and the guests return to their rooms. Later that night, the guests find Tobey, dead from an apparent suicide. Upon arriving in Monte Carlo, the guests are questioned by Inspector de la Croix (Dany Boon), who believes that Nick and Audrey, "the Americans", are guilty of the murders.

Who plays who in the Murder Mystery movie cast?

Here is the full cast and characters of "Murder Mystery" movie. Actors and actresses are sorted mostly in credits order.

"Murder Mystery" movie release date was scheduled to be on June 14, 2019 (United States) distributing by Netflix.

What are Murder Mystery filming details?

"Murder Mystery" movie is rated "PG-13", according to the MPAA film rating system.

What are critics and audiences saying about Murder Mystery movie?

More information and reviews on "Murder Mystery" movie you can get on the following websites.

You can watch Murder Mystery online streaming on Netflix:

Murder Mystery on IMDB is available at:

Murder Mystery on Wikipedia is available at: