Is there a trailer for jackass fore♥er movie? 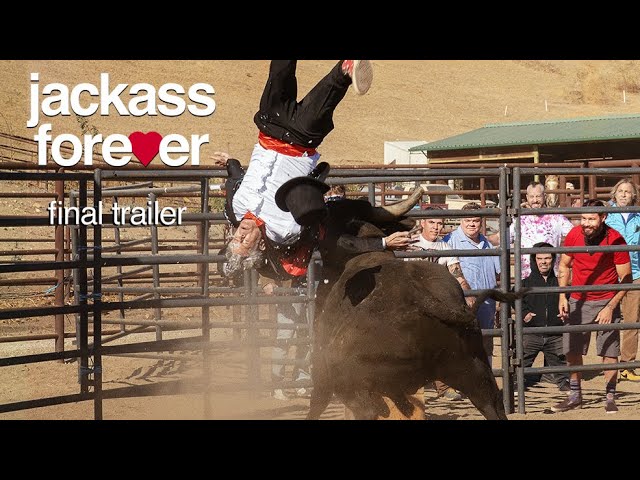 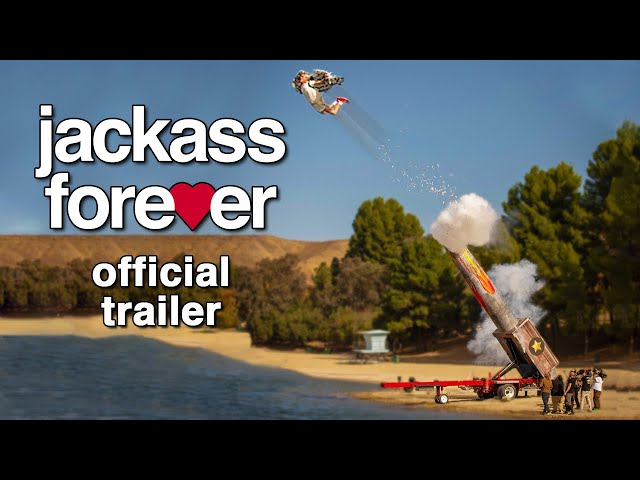 What is jackass fore♥er movie plot?

Jackass Forever does not contain a story but is a compilation of stunts, skits and pranks intercut with on-set talking heads with its cast. The film begins with a tribute to kaiju cinema, in what appears to be a city being overrun by a giant green monster. In reality, it is Chris Pontius' penis painted green over a small set of a city intercut with the cast members running through a life-size set of the same city. The intro ends with the "monster" bitten by a snapping turtle and Johnny Knoxville's intro, "Hello, I'm Johnny Knoxville, welcome to Jackass!"
Stunts and pranks with the main cast include Knoxville facing a bull resulting in dangerous consequences, Steve-O having his penis used as a beehive, Dave England getting pig semen dumped on him, a vulture eating pieces of meat off Wee Man's body, Ehren McGhehey being subjected to painful tests with an athletic cup, Pontius' penis being used as the paddle for paddle ball, and Preston Lacy's testicles being used as a human punching bag. The newcomers are also featured in many of the stunts and pranks, including Poopies fighting off a Texas Ratsnake, Zach Holmes gliding down into a bed of cactuses, Jasper Dolphin being shot off a ramp by large industrial fans while he's holding a parachute, Eric Manaka riding a bicycle full speed into a false wall, and Rachel Wolfson having a scorpion sting her lips.
The final stunt, Vomitron, features Zach, Dave, Eric, Poopies, Steve-O and Jasper drinking milk while strapped to a high-speed carousel. As they start vomiting, Knoxville and the rest of the cast initiate an attack involving paintball guns, a tennis machine and multiple explosions. After assuring the stunt is over, one big explosion is set off, surprising the victims of the stunt.

Who plays who in the jackass fore♥er movie cast?

Here is the full cast and characters of "jackass fore♥er" movie. Actors and actresses are sorted mostly in credits order.

What are jackass fore♥er filming details?

"jackass fore♥er" movie is rated "R", according to the MPAA film rating system.

What are critics and audiences saying about jackass fore♥er movie?

"jackass fore♥er" movie got high rating from critics. IMDB rating is 6.9/10. Audiences polled by CinemaScore gave the film an average grade of "B+" on a scale ranging from A+ to F.

More information and reviews on "jackass fore♥er" movie you can get on the following websites.

jackass fore♥er on IMDB is available at:

jackass fore♥er on Wikipedia is available at: