Here are "In Fabric" movie trailer, plot summary, full cast and characters, release date, streaming services and everything we know so far.

Is there a trailer for In Fabric movie? 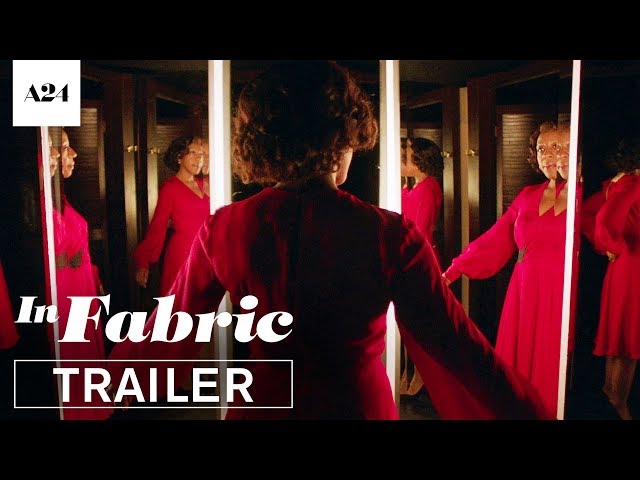 What is In Fabric movie plot?

Here is a short review of "In Fabric" movie plot summary.

Sheila (Marianne Jean-Baptiste) is a recently divorced bank teller who lives with her son Vince (Jaygann Ayeh). She is frequently chastised for insignificant work errors by her bosses Stash (Julian Barratt) and Clive (Steve Oram), and intimidated by Vince's new girlfriend Gwen (Gwendoline Christie). She visits department store Dentley and Soper's to buy a dress for a forthcoming date in the sales. After meeting the enigmatic store clerk Miss Luckmoore (Fatma Mohamed), Sheila is drawn to a beautiful, flowing red dress which she tries on. Luckmoore convinces Sheila to purchase it.
Sheila notices a strange rash on her chest after wearing the dress. After putting the dress in the washing machine, the machine breaks down resulting in Sheila injuring her hand in the process of trying to 'subdue' it. Sheila returns to the store to get a new size for the dress only to learn that there is only one version of the dress and that the store model was killed after wearing the dress for the store catalogue. Sheila goes on a date with new suitor Zach (Barry Adamson) while Gwen and Vince have sex. As she climaxes, Gwen is almost killed when the dress floats above her and tries to suffocate her. Sheila and Zach go for a walk together, where Sheila is attacked by an Alsatian, which cuts her leg and rips the dress in the process. Later that day, Vince returns home with the dress which is somehow now fully repaired. After hearing the dress move about in the wardrobe at night, an unsettled Sheila attempts to return the dress to the store but is refused by Luckmoore. Sheila is then killed in a car accident as she is driving en route to spending the night with Zach.

Who plays who in the In Fabric movie cast?

Here is the full cast and characters of "In Fabric" movie. Actors and actresses are sorted mostly in credits order.

When is In Fabric movie release date?

What are In Fabric filming details?

"In Fabric" movie is rated "R", according to the MPAA film rating system.

What are critics and audiences saying about In Fabric movie?

More information and reviews on "In Fabric" movie you can get on the following websites.

In Fabric on IMDB is available at:

In Fabric on Wikipedia is available at: