Is there a trailer for Escape Plan 2: Hades movie? 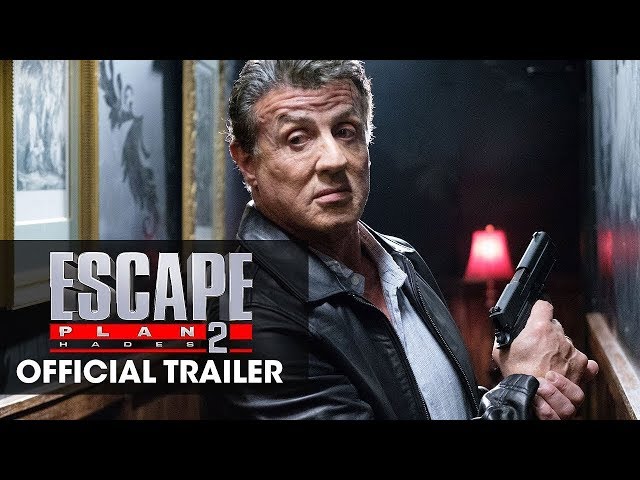 Ray Breslin (Sylvester Stallone) continues to operate his security company to some success, with senior members Hush (50 Cent) and Abigail (Jaime King) and newcomers Shu Ren (Xiaoming Huang), Jasper Kimbral, and Luke Graves (Jesse Metcalfe) as field operators. During a hostage rescue mission in Chechnya, Kimbral, trusting his computer algorithms, deviates from the mission objectives. This results in one of the hostages being shot, later dying of her wounds; Breslin fires Kimbral as a result.
A year later, Shu is contacted by his family to protect his cousin Yusheng Ma (Chen Tang). Soon to announce groundbreaking satellite communications technology from his telecommunications company, Yusheng has been targeted by a rival company, Ruscho. After attending a party in Bangkok, Shu defends Yusheng from masked men, but both are stunned with M-26 military-grade tasers and kidnapped.
Later, Shu finds himself imprisoned in an unknown arena, where inmates are forced to fight. Shu is forced to brawl another prisoner and wins, and encounters fellow inmate Kimbral, who explains the prison is called Hades, where he has been held for several months. Luke, Hush, Abigail, and Breslin attempt to locate Shu after his and Yusheng's disappearance.
Drawing on Breslin's training to formulate an escape plan, Shu meets the warden Gregor Faust (Titus Welliver), who calls himself the "Zookeeper", and learns that Faust wants Yusheng's communications patents in exchange for their release. Yusheng tells Shu that he buried the technology for fear it could be used to hijack any nuclear launch system in the world, and they resolve to escape.

Who plays who in the Escape Plan 2: Hades movie?

Here is the full cast and characters of "Escape Plan 2: Hades" movie. Actors and actresses are sorted mostly in credits order.

What are critics and audiences saying about Escape Plan 2: Hades movie?

More information and reviews on "Escape Plan 2: Hades" movie you can get on the following websites.

Escape Plan 2: Hades on IMDB is available at:

Escape Plan 2: Hades on Wikipedia is available at: