Is there a trailer for Marvel Rising: Secret Warriors movie? 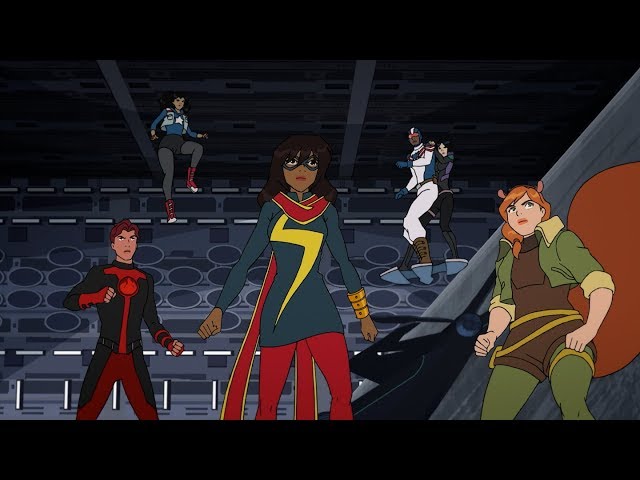 Kamala Khan is a teenager who lives in Jersey City, New Jersey, and is also an Inhuman with shapeshifting abilities and lives a secret life as the superheroine Ms. Marvel (Kathreen Khavari). She idolizes Captain Marvel (Kim Raver), but clashes with her mother, who believes her interest in superheroes is time-wasting, and she has yet to overcome all of the unfortunate difficulties of being a rookie superhero. Kamala and her best friend Doreen Green (Milana Vayntrub), a fellow superhero known as Squirrel Girl, stop a thief in the park who steals from a food vendor. The thief is Dante Pertuz (Tyler Posey), who can control and manipulate fire. The girls also meet Victor Kohl, who is tracking Dante and tells them about how he is working to protect Inhumans from their own destructive powers. Victor and Dante both flee the scene before Kamala and Doreen are approached by S.H.I.E.L.D. agents Quake (Chloe Bennet) and Patriot (Kamil McFadden), who have also been tracking violent incidents involving Inhumans. The agents leave, and the two friends decide to find Victor and Dante and solve the Inhuman incidents themselves and prove that Inhumans should be seen as heroes and not threats.
America Chavez (Cierra Ramirez) has her motorcycle stolen by Dante, who is still unwilling to work with Victor, as he hates his powers for how they ruined his life. An accidental gas explosion in the street forces America, Kamala, Doreen and the S.H.I.E.L.D. agents to work together. Shortly after, Quake is arrested by the agency for unsanctioned action in investigating the Inhumans. Kamala flashes back to when her powers were activated by the Terrigen bomb, and fears that Dante might be struggling with his own powers. She and Doreen argue about if they should trust Dante or Victor. Victor propositions Kamala to join his organisation, and fights her when she declines, as he transforms into his superhuman persona, Exile (Booboo Stewart). He reveals that he is working for Hala the Accuser (Ming-Na Wen), who is scouting Inhumans to join the Kree, a militaristic alien race. Exile kidnaps Kamala, and she disappears into a portal. Doreen joins together with America and Patriot to rescue Kamala. They help Quake to break out of custody, who joins them and reveals that she is also an Inhuman. They are also joined by Captain Marvel, who uses her resources to assist the search.

Who plays who in the Marvel Rising: Secret Warriors movie?

Here is the full cast and characters of "Marvel Rising: Secret Warriors" movie. Actors and actresses are sorted mostly in credits order.

What are critics and audiences saying about Marvel Rising: Secret Warriors movie?

"Marvel Rising: Secret Warriors" movie got high rating from critics. IMDB rating is 5.2/10. Rotten Tomatoes rating is 100/100. But the audience dislikes the film.

More information and reviews on "Marvel Rising: Secret Warriors" movie you can get on the following websites.

Marvel Rising: Secret Warriors on IMDB is available at:

Marvel Rising: Secret Warriors on Wikipedia is available at: