Is there a trailer for Carmen Sandiego TV series? 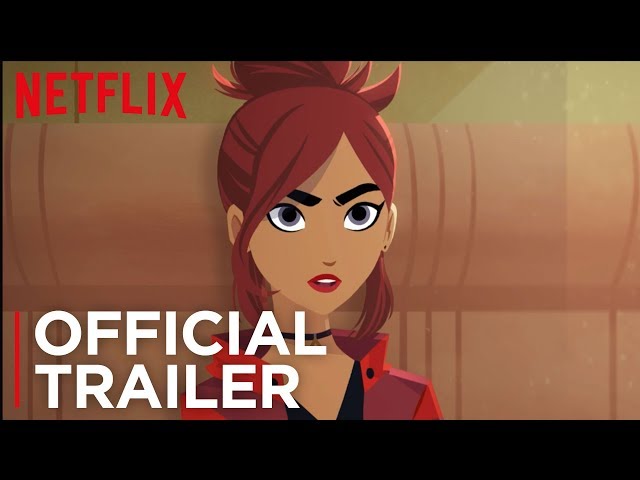 An orphan girl codenamed Black Sheep was found on the side of the road in Buenos Aires, Argentina roughly 20 years ago and is raised and trained to become a master thief by a group of villains who double as the faculty at V.I.L.E. Academy, a school for thieves and secret criminal underworld organization, located on the Isle of V.I.L.E. in the Canary Islands. Black Sheep considers the isle and faculty her home and family until she learns the organization's true nature. She goes rogue, adopting the name Carmen Sandiego (Gina Rodriguez), and seeks to take down V.I.L.E. by stealing things they have already stolen and returning them to their rightful owners and stopping their future heists and plans from being executed. Carmen's friends and team are white-hat hacker Player (Finn Wolfhard), who works as recon tech support and who she has been in contact with since her school days on the isle, and Boston siblings Zack (Michael Hawley) and Ivy (Abby Trott), who help her on-scene and often act as distractions or operate the various get-away vehicles. She treats each one of them with care and together, they set out to thwart V.I.L.E.'s schemes for global conquest all while on the run from the mysterious secret government agency; A.C.M.E., who have sets their sights on arresting V.I.L.E and Carmen.
A recurring theme is that both V.I.L.E. and A.C.M.E. make mistaken assumptions about Carmen's actions.
In season one, Carmen is a modern-day Robin Hood, traveling the globe, stealing from V.I.L.E. and giving back to its victims. Cloaked in red, she is accompanied by her hacker Player, and her best friends Zack and Ivy. Carmen is publicly perceived as a criminal by most law enforcement agencies - or actually, make that a master criminal due to the sheer scale and theatricality of her heists. We follow her escapades and get to determine not only where in the world but "who" is Carmen Sandiego?

Who plays who in the Carmen Sandiego TV series?

Here is the full cast and characters of "Carmen Sandiego" TV series. Actors and actresses are sorted mostly in credits order.

What are Carmen Sandiego filming details?

"Carmen Sandiego" series are produced by WildBrain Studios, HMH Productions and I Can & I Will Productions.

What are critics and audiences saying about Carmen Sandiego TV series?

More information and reviews on "Carmen Sandiego" TV series you can get on the following websites.

You can watch Carmen Sandiego online streaming on Netflix:

Carmen Sandiego on IMDB is available at:

Carmen Sandiego on Wikipedia is available at: