Is there a trailer for Black Monday TV series? 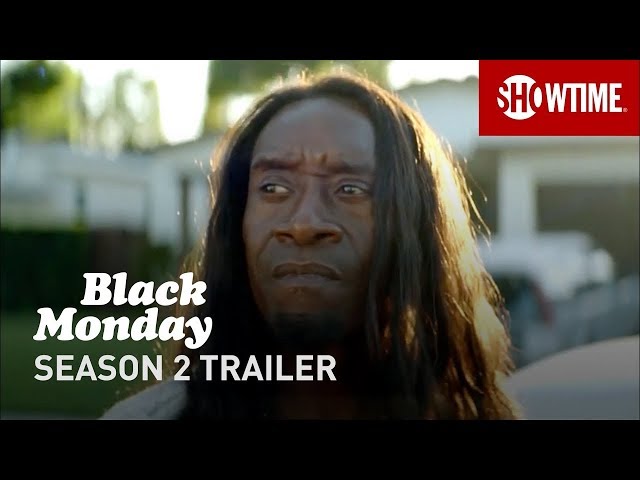 The first season follows Blair Pfaff (Andrew Rannells), an aspiring white stockbroker on Wall Street. Through a series of farcical events, he ends up working for Maurice Monroe (Don Cheadle), a veteran stockbroker. Blair endures workplace hazing and fights to prove he's tough enough for the high-stakes environment. Simultaneously, he tries to preserve his strained engagement to spoiled heiress Tiffany Georgina (Casey Wilson). Monroe plans to use Blair to execute an underhanded business deal that involves buying out Tiffany's family company, Georgina Jeans.
Dawn Darcy (Regina Hall), the only woman among her coworkers, is running out of patience when it comes to Monroe's unwillingness to recognize her value in the workplace. Her husband wants to have children, leading to a crossroads in their marriage. Keith (Paul Scheer), an employee who takes entrance in bullying Blair, is a closeted homosexual who carries on an affair with a Broadway performer. Monroe, meanwhile, struggles with the internal turmoil of reaching the high standards he sets for himself, as well as living under a false identity.
The resulting backdoor deals, personal conflicts, and the journey of a particular pin create an increasingly convoluted mess as Black Monday approaches.
Black Monday is described as taking the audience "back to October 19, 1987 - aka Black Monday, the worst stock market crash in Wall Street history. To this day, no one knows who caused it - until now. It's the story of how a group of outsiders took on the blue-blood, old-boys club of Wall Street and ended up crashing the world's largest financial system, a Lamborghini limousine, Don Henley's birthday party and the glass ceiling."

Who's in the Black Monday TV series cast?

Here is the full cast and characters of "Black Monday" TV series. Actors and actresses are sorted mostly in credits order.

What are Black Monday filming details?

The average duration of each episode is 29 - 35 minutes. Country of origin: United States. Original language: English.

What are critics and audiences saying about Black Monday TV series?

More information and reviews on "Black Monday" TV series you can get on the following websites.

Black Monday on Wikipedia is available at: