Is there a trailer for Disenchantment TV series? 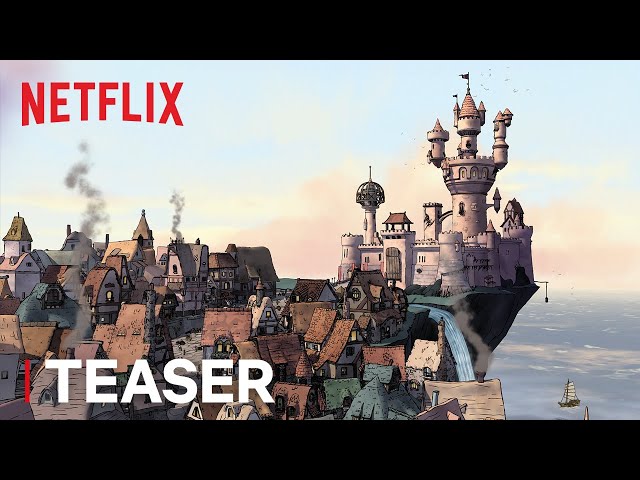 What is Disenchantment TV series plot?

Set in the fictional patriarchal medieval European kingdom of Dreamland, the series follows the story of Bean (Abbi Jacobson), a rebellious, alcoholic, adventurous gentle, selfless and fearless princess, her naive elf companion Elfo (Nat Faxon), and her destructive but caring "personal demon" Luci (Eric André) having adventures in different locations.
«Part 1»:
The first season starts off with Princess Bean having two failed arranged marriages and meeting a naive elf named Elfo and a demon named Luci, over the course of the following episodes the trio roughhouse and have misadventures in the kingdom of Dreamland much to her father, King Zøg's disapproval who is trying to use Elfo to create the mystic elixir of life. As the story progresses on, some episode give pieces of Bean's history and relatives, others introducing new lands and realms that are part of the medieval world the series is set in and some introducing new characters.
The final three episodes form an arc that starts with Zøg getting fed up with his failed experiments on Elfo but his advisor, Odval (Maurice LaMarche) has found an ingredient that is guaranteed to make the spell work. Bean and Luci are sent on this mission and after traveling, fighting off Big Jo and rescuing Elfo, they manage to get the final ingredient and return to Dreamland but are faced with a new revelation, Elfo is not a real elf. Elfo is then expulsed from the kingdom and is followed by Bean and Luci whom travel with him to his homeland but followed by Zøg's soldiers whom intend to bring the elves with him but are fought off by Bean, Luci, Elfo and elves. Despite a short-lived victory, Elfo is shot by an arrow and dies. Bean becomes furious with her father whom tells Bean that he tried to revive his wife, Queen Dagmar (Sharon Horgan) whom died of petrifaction 15 years ago. Heartbroken by the revelation, Bean apologizes to her mother for everything until Luci reveals that he nabbed the Eternity Pendant. Bean decides to use the vial but is conflicted on which person should she use it on.

Who plays who in the Disenchantment TV series cast?

Here is the full cast and characters of "Disenchantment" TV series. Actors and actresses are sorted mostly in credits order.

What are Disenchantment filming details?

"Disenchantment" series are produced by The ULULU Company and Rough Draft Studios.

The average duration of each episode is 22 - 36 minutes. Country of origin: United States. Original language: English.

What are critics and audiences saying about Disenchantment TV series?

More information and reviews on "Disenchantment" TV series you can get on the following websites.

You can watch Disenchantment online streaming on Netflix:

Disenchantment on IMDB is available at:

Disenchantment on Wikipedia is available at: