Is there a trailer for Neo Yokio TV series? 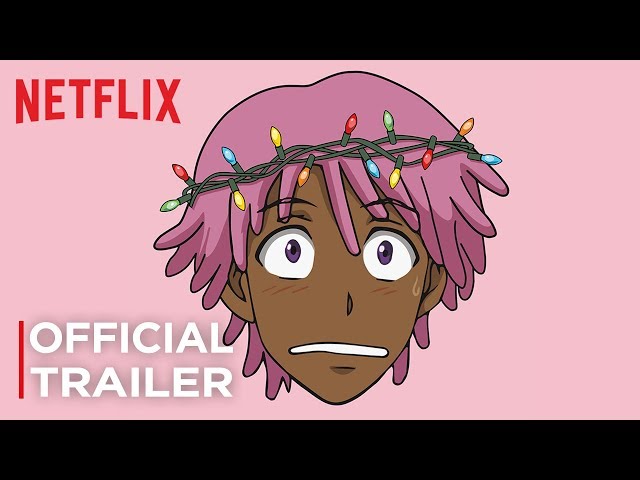 Netflix's press release describes Neo Yokio as the "greatest city in the world", a modern-day alternate timeline New York where Magicians saved the city from ruin by demons in the 19th century, gaining a place in the upper echelons of society and becoming known as "Magistocrats". The series revolves around Kaz Kaan (Jaden Smith), a vain and wealthy Magistocrat and his mecha butler Charles (Jude Law), as he balances a vapid and decadent life as a fashionisto in the city with his demon-hunting duties managed by his stern Aunt Agatha (Susan Sarandon).
Kaz has taken to self-pity and "melancholy" after his recent break-up with investment banker Cathy (Alexa Chung) and only wishes to live a life of luxury with his socialite friends Lexy (The Kid Mero) and Gottlieb (Desus Nice). His rival is Arcangelo (Jason Schwartzman), an old money scion who belittles Kaz's "Neo riche" status, and the two are often in competition for the top spot on the Bachelor's List, a gigantic public billboard of Neo Yokio's most eligible bachelors. Former fashion blogger Helena St. Tessero (Tavi Gevinson) becomes re-acquainted with Kaz in the first episode after he performs an exorcism on a possessed Chanel suit. However, the possession left Helena disillusioned with Neo Yokio and the capitalist system, eventually becoming a hikikomori, anti-capitalist critic and a foil to Kaz's vapid focus on fashion and social status.

Who plays who in the Neo Yokio TV series?

Here is the full cast and characters of "Neo Yokio" TV series. Actors and actresses are sorted mostly in credits order.

What are Neo Yokio filming details?

The average duration of each episode is 22 minutes and 65 minutes. Country of origin: United States, Japan and South Korea. Original language: English.

What are critics and audiences saying about Neo Yokio TV series?

More information and reviews on "Neo Yokio" TV series you can get on the following websites.

You can watch Neo Yokio online streaming on Netflix:

Neo Yokio on IMDB is available at:

Neo Yokio on Wikipedia is available at: