Here are "The Last Summer" movie trailer, plot summary, full cast and characters, release date, streaming services and everything we know so far.

Is there a trailer for The Last Summer movie?

Netflix on Tuesday, April 09, 2019 released the trailer for "The Last Summer" you can watch here:
The Last Summer | Official Trailer | Netflix. 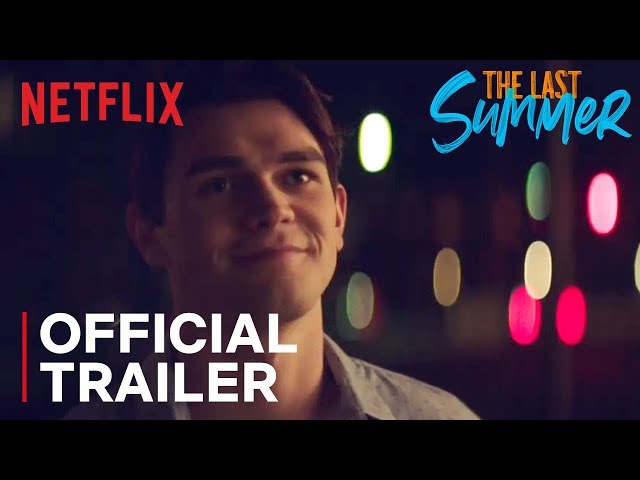 What is The Last Summer movie plot?

Here is a short review of "The Last Summer" movie plot summary.

An interconnected group of recent high school grads navigates through personal issues while enjoying their "last summer" before moving on to college.
«Griffin and Phoebe»:
Griffin Hourigan (KJ Apa), a prep school grad, is preparing to enter Columbia University, thanks to nepotism (his father), despite wanting to attend Berklee College of Music. At a party, he reencounters Phoebe Fisher (Maia Mitchell), a childhood friend he has always had a crush on. Learning that she is making a documentary, he volunteers to help.
He asks her out, but she initially declines, explaining she must spend the summer focusing on making her film. They view a clip from the documentary where a couple plan for a long-distance relationship, and both predict it won't last. He helps her mix the audio, becoming closer, and soon begin dating.
Phoebe, wanting to attend NYU, explains she has to win the festival to pay for school. She also encourages him to follow his passion for music. Meanwhile, Griffin learns that his father is having an affair with Phoebe's single mother. He doesn't tell her until after Phoebe's mother finds out and ends it. A devastated Phoebe blames Griffin for saying nothing, breaking it off.
Apologizing directly to Phoebe's mother, he then sends Phoebe her favorite takeout and she invites him to the documentary premiere. It is well-received, and Phoebe is able to attend NYU. They reconcile, and he has decided to follow his dreams and attend Berklee. As they won't both be attending school in NYC, they say they'll try long-distance, then jokingly say it is doomed.

Who plays who in the The Last Summer movie cast?

Here is the full cast and characters of "The Last Summer" movie. Actors and actresses are sorted mostly in credits order.

When is The Last Summer movie release date?

"The Last Summer" movie release date was scheduled to be on May 3, 2019 (United States) distributing by Netflix.

What are The Last Summer filming details?

What are critics and audiences saying about The Last Summer movie?

"The Last Summer" movie got average rating from critics. IMDB rating is 5.6/10. Rotten Tomatoes rating is 29/100. The audience dislikes the film either.

More information and reviews on "The Last Summer" movie you can get on the following websites.

The Last Summer on IMDB is available at:

The Last Summer on Wikipedia is available at: